Schools in Oakland started early this year, Monday, Aug. 13, one week earlier than in recent years to align the school district’s schedule with local colleges so high school students can also enroll in college classes and to allow for an easier payroll system for new teachers.

The first day was filled with excitement, joy and some tears, as students were eager to return to school to see old friends, make new ones and get to know new teachers.

One person who was as excited as anyone for the first day of classes was Superintendent Kyla Johnson-Trammell. She traversed the district visiting schools along the way, greeting students and staff, observing the learning process and helping with a backpack giveaway.

At Brookfield, Dr. Johnson-Trammell helped out with the school’s backpack and school supply giveaway, which was organized and funded by SupplyBank with support from Kaiser Permanente.

Later, at Skyline, Oakland Unified School District Board of Education President Aimee Eng, Superintendent Johnson-Trammell and much of OUSD’s leadership team toured the campus and stopped in several classrooms, including the leadership class and the new Skilled Trades FabLab.

At a press conference, Dr. Johnson-Trammell talked about the increase in pathways offered for high school students, especially at Skyline where all students are now in career-related pathways.

She also spoke of the improved graduation rates across the District, which last year saw more than 70 percent of students graduate. At Skyline, the graduation rate increased more than six percentage points.

Board President Eng said she is confident in the Board of Education and the district leadership team’s ability to ensure the financial stability and sustainability of OUSD well into the future.

From the Skyline community, new Co-Principals Bianca D’Allesandro and Nicole Pierce-Davis shared their excitement for the new year in their new environment. Student Body President Antwan Adams and Vice President Melesungu Ofa stressed that they plan to build school spirit and they look forward to improved culture and safety on campus.

The team ended the day with an after school visit to Sankofa Elementary School, where they met with principal Renee Bullie. 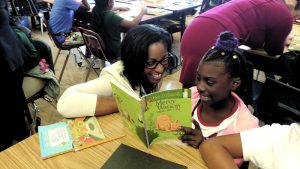 They also got to play with some transitional kindergarten students in the afterschool program and speak with teachers in a professional development session.

“Everybody quite honestly has been working on the first day of school since school let out in June. So being able to see all the hard work… the first day is the culmination, we were able to see the execution of all the planning,” said Johnson-Trammell.

At Martin Luther King Jr. Elementary School there was a huge backpack giveaway Monday morning hosted by the Lend A Hand Foundation and Wells Fargo.

Ohlone Gathering and Other Activities in East Bay Parks

Marin in Need of More Resource Families for Teens

‘Restorative Justice’ Strategy to be Used in Marin City