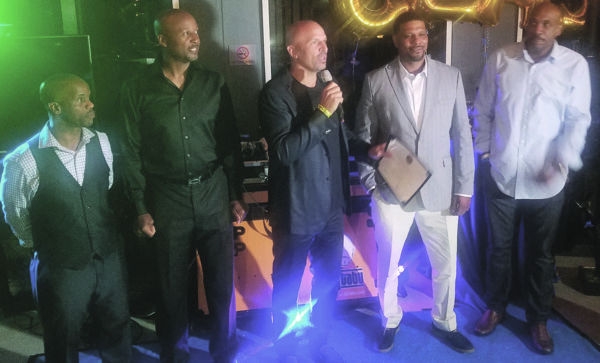 NBA icon Jason Kidd addresses the audience at the Port Work Spaces on the roof top of the Kaiser Center in the heart of downtown Oakland with NBA star Brian Shaw (left) and childhood friend Eric Fortenberry (right).

On Friday, September 7, the iconic basketball star Jason Kidd will be one of thirteen inducted into the Naismith Memorial Basketball Hall of Fame with NBA colleagues Grant Hill, Ray Allen, and Steve Nash. However his hometown honored Kidd in their own special way on the roof top of the Kaiser Center in the heart of downtown. Presented by HipHopTV, the celebration at the Port Workspaces featured fans, friends, classmates and celebrities at the red carpet event.

Kidd, accompanied by his wife, Porschla Coleman, thanked his hometown supporters and credited several people for helping him become the man he is today. He was also praised by his elementary school teacher.

Actor Delroy Lindo attended the meet and greet sponsored by the Oakland Parks and Recreational Department earlier in the day. “As I watched Jason so personable and accessible for the children and people at the event, I thought to myself, that shows the type of man he is,” he said.

Patricia Fortenberry was excited to see Kidd. “My fondest memories of Jason are of him in my kitchen eating,” she said with her husband,  Clarence and daughter in law, Alta. “He was a special boy and I am so proud of all his accomplishments.”

Fortenberry’s son, Eric, said the two spent a lot of their childhood together. “It’s great to see Jason honored in this way, by the local community,” he said. ” Growing up you hope for one another’s success and Jason no doubt put in the hard work and dedication required to be a success.”

Shawn Granberry, CEO of HipHopTV says he’s always wanted to host an event based in Kidd’s hometown. “It’s important to honor our own, especially great men of excellence, like Jason,” he said.

Sports reporter Malaika Babino was equally complimentary. “In the sports world you have a lot of hard working athletes,” she said. “However, Kidd and his success are extraordinary and deserve to be celebrated, right here in Oakland.”

Attendees included athletes Brian Shaw and Gary Payton and actor Lance Gross of the film “Temptation,” among others.

Another Step Toward Fair Housing

Marin: Organize to Protect Your Homes and Communities