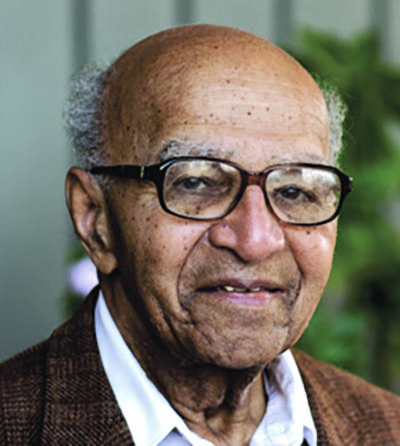 When monuments dedicated to a historic legacy of whiteness are being toppled, it is refreshing that UC Berkeley is honoring Dr. David Blackwell, the first tenured African-American professor (1954-1988). The new structure, a dorm at Bancroft Way and Dana Street opened this fall in time for the influx of new students in need of housing.

The building has commercial space on its first floor and also houses Stiles Hall, a community center for students of color. The dedication is Sept. 11, noon – 3 p.m. at 2401 Durant Avenue. The opening of the new buildingcomes during a period in which Black student enrollment is down, while Black faculty hiring is up.

Dr. Blackwell’s friend and age mate Dr. Albert H. Bowker, who would eventually become chancellor at Berkeley in 1971, said in his introduction to Blackwell’s oral history at the Bancroft Library at UC Berkeley, “David’s remarkable career was established at a time when prejudice ruled in academia. We salute him for his persistence and human courage as well as for his great scholarly achievements”—which are many.

The statistician and mathematician’s innovative research which expanded the areas of probability theory, game theory and information theory, began in the humble railroad town of Centralia, Illinois. There, his parents and teachers cultivated his genius and sent him to the University of Illinois at Urbana at 16, where he excelled, graduating with his Ph.D. at 22.

The graduate knew he wanted to begin a career in education and so he applied to all the historic Black colleges and universities, assuming no white institutions would hire him. This assumption would prove correct for a number of years.

While teaching at Howard University, Blackwell traveled to the west coast as a visiting lecturer at UC Berkeley, and Stanford, where Dr. Bowker taught. Blackwell was recruited by UC in 1941, however he didn’t get the position.

He would be a part of the institution for 50 years.

While there he chaired the Institute of Mathematical Statistics, an international, professional and scholarly society. He was also first African American inducted into the National Academy of Sciences.

Blackwell loved his graduate and undergraduate students and was effective in multiple guises: advocate, as Dean in the College of Arts and Letters, as doctoral advisor and as classroom instructor.

Arif Khatib, Founder and President Emeritus of the African American Sports Hall of Fame and a friend of Dr. Blackwell said:
“Then and now, there are not a lot of people who can match him. He stood alone, he stood out. I used to visit with him regularly on campus where he had an office even after he retired.  He would tell me, ‘stop by, I like talking to you.’ I’d reply: I like talking to you too. We had good times together. His wife, Ann Madison Blackwell, was a principal of a school. They were two educational giants.”

How many buildings are dedicated to Black intellectuals on the UC Berkeley campus? None, this is a first.  Khatib said, “I want to see a photo of Dr. Blackwell in the hall. It doesn’t have to be a statue, so when students walk into the building they see the image of this powerful Black man.”

California Prisoners in Isolation Should Be Covered by Class Action, Attorneys...