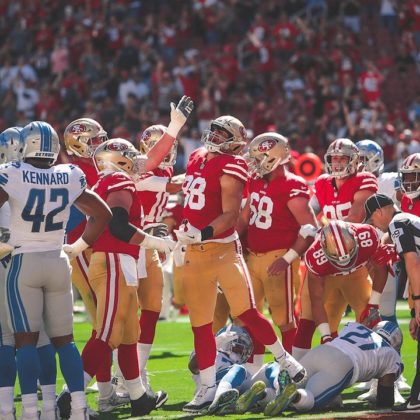 Santa Clara, CA – A win is a win!  The 49ers came out aggressive to start the second half but lost their way in the fourth allowing the Detroit Lions to score seventeen points to rally a comeback.

Luckily a penalty and good defense prevailed, San Francisco beat the Lions 30-27 to earn their first win of the season.  But Jimmy Garoppolo’s pass on the  final drive was intended for Matt Breida but was intercepted by Tracy Walker who ran it back for 37 yards.

A huge break for the 49ers, that play was called back due to a holding penalty on Quandre Diggs.  San Francisco got the ball back but failed to gain any downs.  Detroit didn’t have much luck either, with a little over a minute left in the game.  They struggled against a stout 49ers defense and turned the ball over on fourth down.  That led to San Francisco running out the clock to end the game.

After a 30-13 lead, they 49ers let the Lions back in the game.  Outscored 14-0 in the fourth quarter it took Detroit’s own mistakes to secure San Francisco’s win.  The Lions scored twice, Matthew Stafford connected with both Marvin Jones for a 5-yard touchdown and Michael Roberts for a 15-yard touchdown to cut the lead down to three.

“We had a lot of energy at the beginning of the game and throughout the game, especially when we got that lead,” said DeForest Buckner.  “I feel like the energy kind of fell off a little bit and we needed to build it back up that last defensive stand that we had.  I feel like guys kind of woke up during that last drive on defense.  We’ve got to keep the pedal down all four quarters.”

The pedal was certainly down in the first three quarters.  Despite Garoppolo getting roughed up, he tossed two touchdowns and went 18-for-26 for 206 yards.  Garoppolo found his groove in the second quarter.  He threw a short 4-yard touchdown pass to Kendrick Bourne and put the 49ers up 10-7.

The 49ers come out of the half more aggressive.  Garoppolo quickly found Garrett Celek for a 11-yard touchdown.  Breida rushed for a 66-yard touchdown with the help of exceptional blocking by Pierre Garcon.  That was SanFrancisco’s longest touchdown since Colin Kaepernick’s 90-yard touchdown back in 2-14 against the San Diego Chargers.

“He’s a monster,” Brieda said.  “He’s fearless to go to the middle to catch balls and he’s not afraid to block.   I feel like that is what’s going to one day make him a Hall of Famer.  He’s been in this league for a long time and that’s the reason why.  He can do it all.”

“You know you’re assignment,” Garçon said.  “There’s one guy left.  You don’t care where you’re at, you just want to make sure your guy doesn’t make the tackle.”

“The Ladies In Red” Celebrate 22 Years of Women’s Empowerment