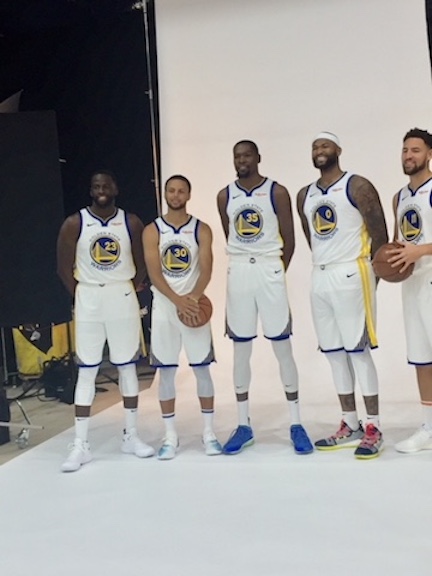 Oakland, CA – Another media day, another reason to watch the Golden State Warriors.  The National Basketball League held Day 1 of media day today and while the Warriors return after winning their third NBA Championship all of their pieces to the puzzle haven’t quite been put in place.

Head coach Steve Kerr addressed the issue of the starting center job.  Until DeMarcus Cousins returns from injury that position will be decided before Opening Night.  Draymond Green will not be an option this year and that leaves three, Damian Jones, Kevin Looney and Jordan Bell.  While Looney is the likely candidate he’s already ready for the opportunity.

“I think we all bring something to the table at the center position,” Looney said.  “We all have different strengths.  I know I’m a good rebounder, and I’m looking forward to showing what I can do.”

“The thought is who will be the starter right now and not before the game starts,” Kerr said.  “I can tell you for sure that Draymond will not be the starting center.  I’m not going to start small so, on opening night the chances are it will be one of the other three Damian, Loone or Jordan Bell.

Thompson is right, the journey is long but can go by very quickly.  Everyone is excited about the upcoming season and the addition of Cousins.  No one wants to talk about contract negotiations that loom over this upcoming season for Thompson, Green and Durant.  Everyone just wants to play good basketball and win.

“We’re all smart players, we all know how to play the game,” said Durant.  “We’ve got basketball masters on this team that know exactly what to do in certain situations.  And I think DeMarcus is one of those basketball geniuses that knows exactly who he is and what he needs to do to be effective. 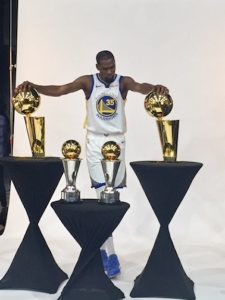 Stephen Curry stated that he had one of the best summers ever in regards to prep work for the upcoming season.  He also addressed the numerous questions on whose staying and whose going.

“That doesn’t matter right now,” Curry said.  “We have five preseason games, 82 regular-season games and hopefully 16 wins in the playoffs.  And then you can ask all the questions you want.

So what’s the plan for the 2018-19 season?  Win another championship.  Coming off of a another fun filled summer, the guys now focus their attention on the schedule.  Each championship gets harder and harder but very worthwhile in the end and no one wants this ride to end.

“None of us are ready for this run to come to an end,” Green said.

This will also be the last year the Warriors play in Oracle arena before they move across the bridge to the new Chase Center next year.  Oracle has been a place for basketball for decades and now this chapter of the Warriors history will come to an end.  The final season will be a memorable one for the team, organization and the fans.

“This last year is going to be special,” said Curry.  “The journey, from some pretty down years to some really entertaining basketball but didn’t win much, to now having won three out of the last four, all that happened in Oracle Arena.  Our fan base has been tremendously supportive.  They’ve given us a feared place to play in from an opponent standpoint in terms of the noise and the energy and the atmosphere.  That’s something we really relied on.  Honestly, for me, it’s my 10th year in the league, that’s been my only experience, and it’s something that I’ll remember for a very long time.”

Disability No Barrier to Science