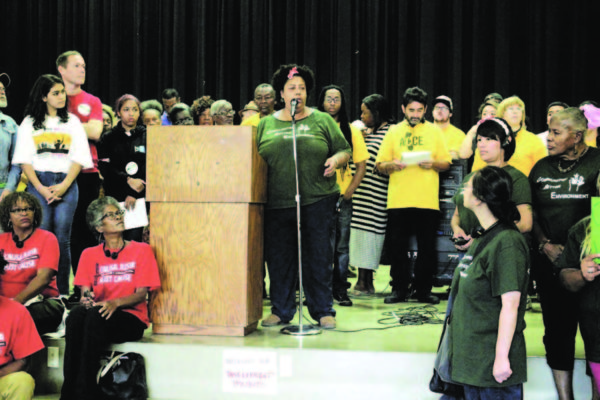 Since the East Oakland Congress of Neighborhoods launched last year, more than 2,000 residents have been organizing, planning and taking action to address illegal dumping, environmental justice and the housing crisis with concrete solutions.

This umbrella organization now has deeper connections in East Oakland and is expanding to West Oakland. The Congress formed because neighborhood residents are fed up with a lack of action on extremely pressing problems in East Oakland—and vowed to make a difference, especially this election year.

Andre Spearman, a leader with Oakland Community Organizations and a District 5 resident, said the Congress is building real, resident-driven power. “The City is taking notice and acting on our demands,” he said.

“The Community Assembly is just the beginning,” said Pecolia Manigo, an Oakland resident. “We are going to make sure the Congress agenda gets done. The Congress intends to hold Oakland officials accountable.”

Issues to be discussed at the Anniversary include measures on the ballot that will have significant impact on East and West Oaklanders.

“These are the issues that the residents themselves have decided are the most important,” said Evangelina Lara, EBAYC organizer and resident of the San Antonio neighborhood for 18 years. “This Anniversary is bringing together Oakland organizations and residents to build real power, from the West to the far East border.”