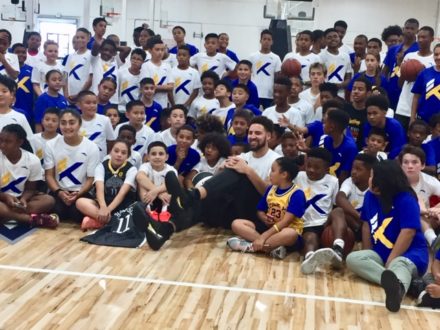 Klay Thompson and the Klay Thompson Family Foundation hosted a camp for 120 kids at SoldierTown in Oakland today.  Thompson still giving back with almost a week away from the start of the 2018-19 NBA season.

The Golden State Warriors also hosted a “open practice” for their fans earlier today and Thomspson still made time to give some friendly advice and run some drills with a few special kids selected for his camp.

Sam Moses, the General Manager of SoldierTown spoke about the Thomspson Family Foundation and that the facility hosts many of the Warriors, current and former NBA players camps for the kids in the community.

Antonio Davis, a former NBA player and native of Oakland dropped by Thompson’s camp to show support.  Thompson took photos, signed autographs, and made a few 3-point shots among a vibrant group of kids ages 6 thru 16.  Thompson answered questions about his favorite gaming station, shoe size and favorite teammate.

Thompson’s recent 30-point night against the Sacramento Kings in Seattle, WA on Friday is a clear indication that he’s ready to embark on another spectacular season.  Thompson exploded in Game 2 of the preseason and appears to be in mid-season form already.

The Warriors host the Phoenix Suns tomorrow at 7:30pm at Oracle Arena.

Book Review: The Blood of Emmett Till

Warriors Stay Undefeated Despite Off Night