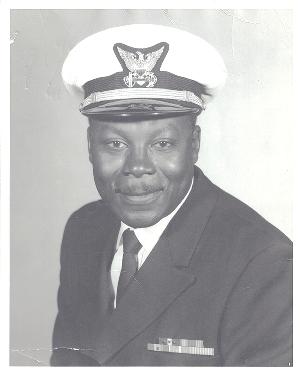 Russell Pouncy, 89, was born on Dec. 28, 1928 and raised in Westmoreland, California. He was the third of twelve children. Throughout his life’s adventures, Pouncy was forever the devoted husband, brother, father, grandfather and great-grandfather. He departed this life on September 27, 2018 at the Mercy Hospice Center in Oakland.

As a very confident, hard working and highly motivated individual, Pouncy spent his working years in the Army, Coast Guard, and real estate. After graduating from McClymonds High School, he entered the Army at the young age of seventeen and served as a Wench Operator in Guam during World War II. After his honorable discharge from the Army, he volunteered for the United States Coast Guard and entered into communications school in Groton, Connecticut, Upon graduation, Pouncy returned to California where he served aboard several different Coast Guard ships, to include the USCGC Iroquois (WHEC-43), a high-endurance icebreaker ship and the USCGGC Storis (W-38) which was one of the four vessels to circumnavigate the North West Passage through the Arctic Ocean. Pouncy was stationed in the 12th Coast Guard District for most of his career.

In 1965, Pouncy was stationed at the Coast Guard Headquarters in Washington, D.C. where he was promoted to Warrant Officer. Upon returning to California, he was selected to be an AMVER Officer for foreign merchant vessels that visited Northern California ports. In 1971, he was transferred to the Coast Guard radio station in Long Beach, as an Executive Officer. After serving in that capacity, he was promoted to Commanding Officer in 1975 until his retirement in 1976. Mr. Pouncy later joined the Valva Realty Company and the Oakland Realty Board as a salesman. After a successful 20-year career in real estate, He retired in 1996.

Russell was preceded in death by his loving wife of 64 years, Juanita Jean Sullivan Pouncy, his adoring son Russell Tyrone Pouncy and Great-Granddaughter Milah Graham. He leaves to cherish his memory a host of family members and friends.

BOOK REVIEW: “Kids Who are Changing the World”

A Roadmap for Counting More African Americans in California During...

Film Shines New Light on the Evolution and Survival of...