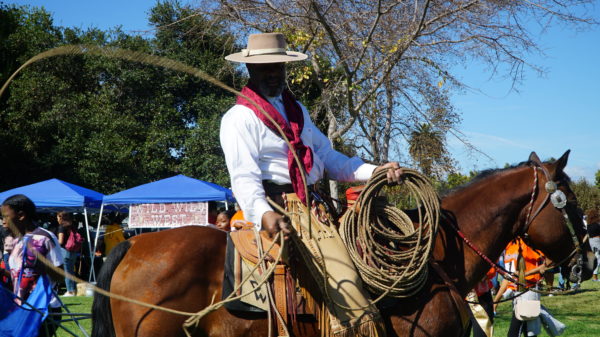 While Zydeco music played over the loudspeakers last Saturday afternoon, contingents in the 44th annual Black Cowboy Parade made their way down 18th street to Adeline.

With onlookers lined up on both sides, a 15-year-old girl astride a brown horse came into view, but instead of a cowboy hat and jeans, she wore a print skirt in a vivid African print skirt in blue hues that also draped her ride.

“You make your horse look good, girl,” the announcer said to encourage her.

After the music, this is the first clue that this parade is different. Mixing Creole and ranch culture, this parade clearly celebrates Black history — but there is an intimacy, a familiarity that marks this as a true community event. Everybody seems to know each other.

West Oakland resident Bernardine Green has never missed a one of the 44 parades. Her companion, Jim Titus has come for 32 years. The couple who brought their own chairs to stake out space by the parade route looked forward to the vendors and the food. “Whatever and corn,” Titus said with a smile.

But, Florence Valentine, who said she grew up with several of the organizers, came for the dancing horses. “I try to come every year.” she said while skimming a brochure about the Black Cowboys.

“When the horses do their performance, I try to get as close (to them) as I can.”

Astride beautiful horses and wearing period uniforms from the 1800s were the Buffalo Soldiers representing the historic 9th and 10th Cavalry of the U.S. who had driven all the

Eventually, the cowboys danced their horses. Most adept was Gregory MCdowell on his horse, Dancing Beauty.

Bringing up the end of the parade was San Jose’s Royal Andaluz, a group of Hispanic riders on horse, ponies and pulling a two-person cart, accompanied by their own band, playing, of course, ranchero music.

California Waste Solutions (CWS), which provides residential and commercial recycling services in the City, also joined in the festivities. Its premier collection truck followed suit in the parade as the driver waived to onlookers as he passed. Under the Oakland Recycles umbrella,  CWS also  provided attendees with important information on how to recycle and

49ers season ends with a loss to the Seahawks