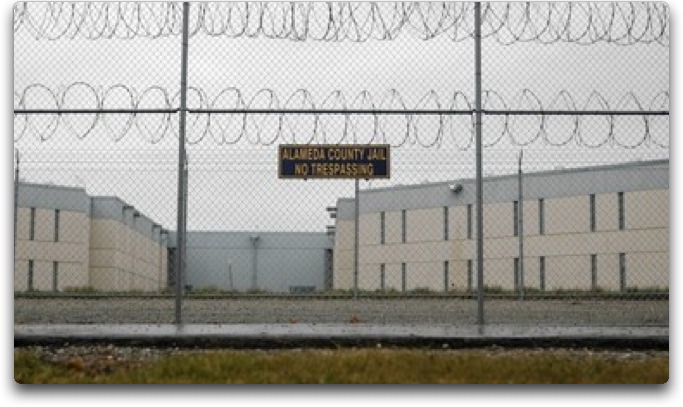 The Live Free Committee of Oakland Community Organization (OCO) released a  report titled “What’s Up With Our Jails?” on Oct. 2. Here’s a continued list of OCO’s findings:

FOOD SERVICES: Complaints about poor jail food and kitchen cleanliness — including reports of animal feces and rats — are common. A recent Alameda County Public Health Department inspection found that 24 percent of persons in Santa Rita were not getting their required diets. Canteen food is available, but only to those who can pay for it.

HYGIENE SERVICES: Female inmates have testified in recent lawsuits that they cannot get the sanitary supplies they need. During the 2017 hunger strike at Glenn Dyer, inmates complained that they were getting only one set of clean clothes per week.

CONTACT WITH FAMILY AND COMMUNITY: Family visitation is restricted to 30 minutes. No physical contact is permitted. Visiting hours are available during limited hours, three days a week. The cost of phone and video calls runs about $6 for 15 minutes.

“It kills me mentally to be in jail,” said a young man who was held in Santa Rita.
“A 30-minute visit maximum a week … is not enough. It breaks families. They use visits as punishment, taking visits away,” said two men formerly held in Santa Rita.

Lack of Translators: Although there are bilingual deputies and ACSO has a rulebook in Spanish, there are no dedicated translators on staff. Translation is often done informally among inmates. Language barriers can prevent individuals from participating in programs and services.

ICE and Undocumented Persons: Despite sanctuary policies passed by the Board of Supervisors that restrict contact between ICE and law enforcement, the Sheriff’s Office has posted inmates’ release dates on the internet. This allows ICE to take undocumented persons into custody (even though being held at Santa Rita Jail is not evidence of criminal guilt) and exposes others to harassment or retaliation as they leave the jail.

RELEASE FROM JAIL: People are often released from our jails at night and alone with no more than a BART ticket — without even a few days’ supply of essential medications. Since Medi-Cal benefits are automatically suspended in jail, many people return to the community with no medical coverage.

“They just release you. No referrals. They gave me a $5 BART ticket. I had to walk to the BART station in my [jail] blues,” according to two young men released from Santa Rita.

Re-entry and Rehab Programs: In 2014, the Alameda County Board of Supervisors adopted a re-entry strategic plan to help break the cycle of returning the same people to jail.

The plan, not yet implemented, acknowledges the need to provide inmates with a wide range of services such as housing, health care, mental health and substance abuse services; employment; and education.

Yet rehabilitative programs within Santa Rita Jail remain underfunded and understaffed, serving relatively few inmates effectively. Only the most motivated individuals tend to get the help they need. But society would be better off if everyone received needed services.

They classify people by tattoos, gang, where they’re from. … Couldn’t take college or trade classes in there because of security,” said one young man who had been in Santa Rita.

“There are waiting lists. Everybody is trying to get into a program,” said another young man who did time in the jail.

For information, go to  www.oaklandcommunity.org/OurJails

Stockton’s Inner City Theatre presents “A Raisin in the Sun”

Cal’s Freshman Class Is Whip-Smart, Fluent in More Than 20 Languages