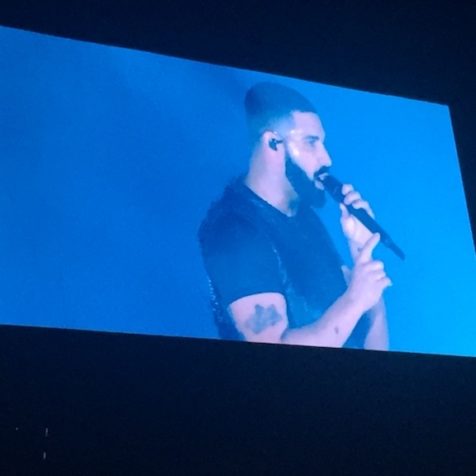 Keeping it very simple using the Warriors jumbotron, and a stage that digitally turned into the ocean with fish and mermaids swimming.  An unusual yellow Ferrari floated thru the air.  No need for any extra props, Drake and Migos music alone was enough for the fans who stood on their feet most of the concert. 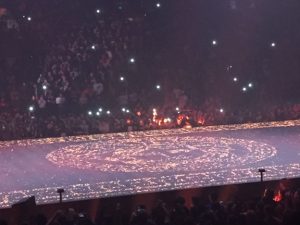 Migos (Quavo, Offset and Takeoff) rapped all of their hits songs including hits “Motorsport”, “Narcos”, Stir Fry” and collaborations with Drake “Walk It Like I Talk It” and “Versace”.  Drake paid tribute to late fashion icon Versace when his label appeared on the stage.  The best song of the night was “Stir Fry” for the Hip Hop trio, the beats from the song got the entire arena off their feet.

Drake has countless hits and collaborations with various artists.  He took us back ten years with some of his first hits that were Billboard hits.  A medley of music that featured “Started from the Bottom”, “the Motto”, “Jumpman” and “Headlines” to name a few.  The biggest surprise of the night is when Drake introduced Oakland’s own E40 and Too $hort who came on stage to perform their hits “Tell Me When To Go” and “Blow The Whistle”.

During the two-hour show, Drake performed at least 40 or more of his hit songs.  He kept a smile on his face throughout the concert while running around on stage so he could acknowledge as many fans in the surrounding pit.  A jaw-dropping performance for a more mature Drake.  Aubrey & the Three Migos tour is definitely a must see! 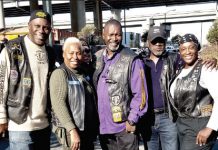