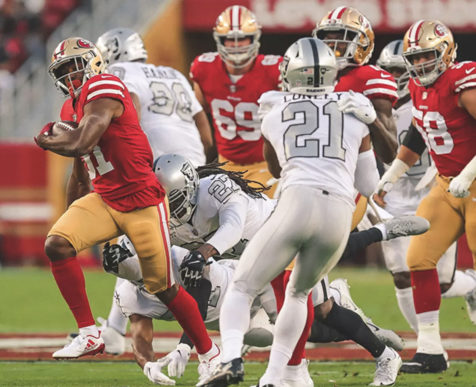 Photo by 49ers
Santa Clara, CA – In the final Battle of the Bay, the 49ers showed no mercy for the struggling Raiders.  In their last season in Oakland and under new head coach Jon Gruden, this Raiders team might be the worst in franchise history.
Tonight San Francisco demolished Oakland 34-3.  The last time these two teams met was December 7, 2014 and the Raiders won 24-13.  Nick Mullens was named the starting quarterback after C.J. Beathard was listed questionable due to an injury.  And in Beathard’s absence Mullens was spectacular.
“We’ve just been keeping our secret weapon ready to go,” said Kyle Shanahan.  “He did an awesome job today.  The guys played real well around him.  There’s a lot on his plate coming in and being his first time in a real NFL game, non-preseason, started off real well, was very poised.  Got the guys in and out of the huddle and did a helluva job.”
Mullens was almost perfect in leading the 49ers to their second win of the season.  He earned his first start and his first win despite, both teams coming into tonight’s game with the worst record in the NFL.   Somebody had to lose but no one expect a one-sided game.
Derek Carr was almost perfect on opening drive, three plays took the Raiders offense to the red zone but San Francisco’s defense made the necessary stops to force Daniel Carlson’s 37-yard field goal to make it a  3-0 game.  Mullens quickly responded with an impressive start leading the 49ers to his first touchdown on opening drive.  Mullens 24-yard touchdown pass to Pierre Garcon made it a 7-3 game.
Mullens and his offense began the second quarter with the ball and inches from the goal line.  His 4-yard touchdown pass to Kendrick Bourne in the end zone extended San Francisco’s lead to 14-3.  In the first two quarters, Mullens went 12-for-17 for 167 yards and two touchdowns.
“It was a four-round fight,” Mullen said on the teams focus tonight.  “The whole week we talked about finishing, finding a way to finish.  You know, tonight, we did.  It’s a four-round fight.  Even in the fourth quarter, foot on the gas.  It was the last round of the fight.  Let’s finish this thing.  So, that was kind of the emphasis for us tonight.”
Meanwhile Carr was sacked four times in the first half.  Unable to move his offense except in the first series.  Oakland didn’t look like a professional NFL team at all.  Nothing went right on offense or defense and it makes you wonder if Jon Gruden was a worth the 100 million dollar investment.  With .52 seconds left in the quarter, Mullens found Richie James Jr. for 53 yards and the first down.  That setup Robbie Gould’s 39-yard field goal to end the half up 17-3.
“He’s a guy who’s athletic and he can throw the ball,” said Jon Gruden.  “He had a couple of wide-open receivers early and inexcusable errors by us.  But, when you can run the ball like the 49ers ran it tonight, it makes playing quarterback a whole lot easier.”
By the start of the third quarter, the 49ers picked up right where they left off.  Mullens connected with George Kittle for a 4-yard touchdown extending their lead 24-3.  On the next drive, with no huddle Mullens found Kittle again for a 17-yard touchdown to completely dominate this game and extend their lead 31-3.

Mullens tied a franchise record for touchdown passes (3) in their first start with team.  He’s the first to do it since Tim Rattey recorded three touchdown passes vs St. Louis 11/2/03.  Mullens averaged 11.9 yds. per attempts, the highest average yards by a 49ers QB in a single-game since 10/18/15 vs Baltimore (QB Colin Kaepernick – 12.9 yes per att.).
Gruden replaced Carr with backup AJ McCarron to finish the game.  Carr has had no help vs the pass rush and despite what Gruden and the organization has said not signing Khalil Mack was the biggest mistake Oakland made this season.  The Raiders offensive line gave up eight sacks.  Carr was sacked 7 times and McCarron once.
Oakland season doesn’t look to get any better but the 49ers have hope.  Both teams suffered numerous injuries however, San Francisco kept a secret weapon in Mullens who will more than likely finish the season as the starting quarterback.
“We just eliminated turnovers and penalties and just playing better football,” Matt Breida said.  “We emphasized this week that everyone do their own job.  Just do your job and things will get done.  I believe that is what we did tonight.”

Raiders Dominate The Jets Early For The Win

Report: 75 Percent of Juvenile Arrests in Oakland Are Black Males

Why Stephon Clark’s Killing Is A Wake Up Call Regarding for...