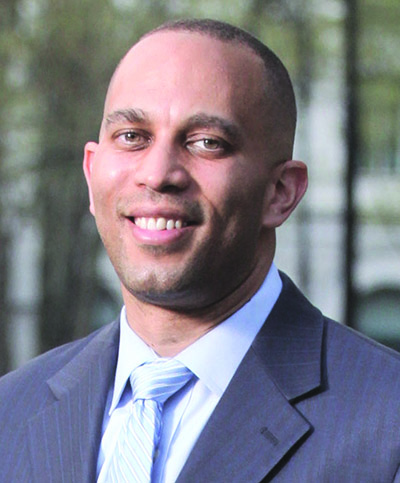 In perhaps the most contentious battle for House Democratic leadership, Rep. Hakeem Jeffries (N.Y.) beat out fellow Congressional Black Caucus member Barbara Lee (Calif.) to take the Democratic Caucus chairman position, the No. 5 spot in Democratic leadership in that chamber.
Jeffries won the race with a vote of 123-113.
With the top Democratic leadership positions uncontested, the caucus chairman position became somewhat of a proxy election for calls of new blood in leadership. Jeffries, 48, sought the position by arguing that he was best-equipped to represent the multitude of viewpoints in the Democratic Caucus. And Lee, 72, argued that, with African-American women serving as a backbone to the Democratic Party, it made sense for an African-American woman to serve in Democratic leadership.
Ultimately, in a race that divided the usually united CBC, Jeffries won out with a tireless whip operation.
Asked after the vote whether ageism or sexism played a role in the results, Lee replied: “Well, I think you heard and saw what took place. So I absolutely think that’s the case.”
Jeffries, however, said the race was just a “friendly competition of ideas.”
While both Jeffries and Lee are unabashedly liberal, Lee has consistently ranked as one of the most liberal members of Congress. She was the only member to vote against the broad 2001 Authorization for Use of Military Force, which has allowed the U.S. to justify military efforts in more than 20 countries over the last 17 years.
Lee has been in Congress for 20 years, and she would have been another seasoned Democrat in leadership, albeit further to the left. But both Democrats are still potential candidates for more-prominent positions in leadership.
For Jeffries, the Democratic Caucus position could be a launching pad to becoming the first African-American speaker of the House. And while Lee lost Wednesday, she could also be a strong future candidate for speaker or another position ― considering her liberal credentials and support among African-American women.

OP-ED: Dylann Roof Was No Accident

Top Graduates Will be Honored at SF State Commencement

OP-ED: Councilmembers Vote Not to Sacrifice Jobs for Growth

John Lewis, Donald Trump Is The Legitimate President Of The United...