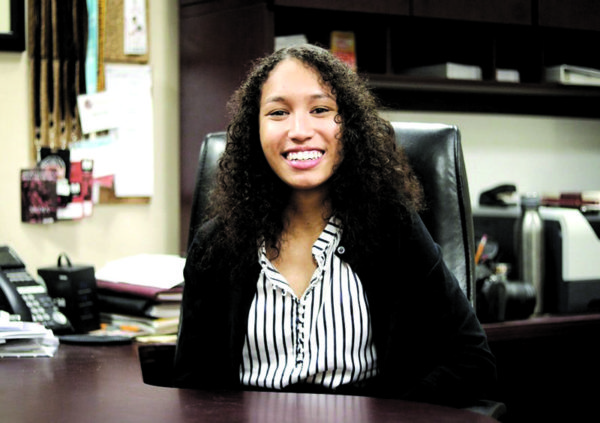 Kristine Guillaume screamed into the phone when she learned that her colleagues at the Harvard Crimson, the student newspaper at the prestigious university, had selected her as their president. It was the end of a months-long process that would put a Black woman in the leadership for the first time in the school’s 145-year history.

The 20-year-old from Queens, N.Y., is a junior studying literature, history and African American studies. She hopes to bring further diversity in coverage and staffing at the paper and to strengthen its digital imprint.
“I’m thrilled to be a part of this historical moment as the first Black female president,” Guillaume said in an email statement. “If my election to The Crimson’s helm affirms anyone’s sense of belonging at The Crimson or anywhere on Harvard’s campus, then that will continue to affirm the work I’m doing.”
Her Chinese mother and Haitian father are both immigrants and physicians, who had hoped their daughter would take up medicine or even law. But it was the family’s regular Sunday morning habit of reading the newspaper and columnists with opposing views that piqued Guillaume’s interest in journalism.
Now, perhaps her parents will be appeased that she has spent so much time in the Crimson newsroom: her new position could not be accompanied by more prestige. Her predecessors are not only renowned journalists who walk the halls of the New York Times, but become leaders in politics and business, including presidents Franklin D. Roosevelt and John F. Kennedy, former Microsoft CEO Steve Ballmer and CNN boss Jeff Zucker.
Only 20 years old, Guillaume takes on the mantle of leadership with confidence. “It’s your job, no matter what stage of leadership, to make sure you are imparting knowledge to your younger writers, but also reporting on things especially pertinent in today’s climate with cultural sensitivity,” she told the New York Times.
She starts as Crimson president in January 2019 and serves for the calendar year.
“I’m incredibly honored to have the opportunity to serve as the next president of The Crimson. We have an outstanding team of leadership next year and I’m looking forward to working with our new managing editor—Angela Fu—and business manager—Charlie Zhu,” she said.

Op-Ed: “Common Enrollment” System Would Give Families Option to Choose a...