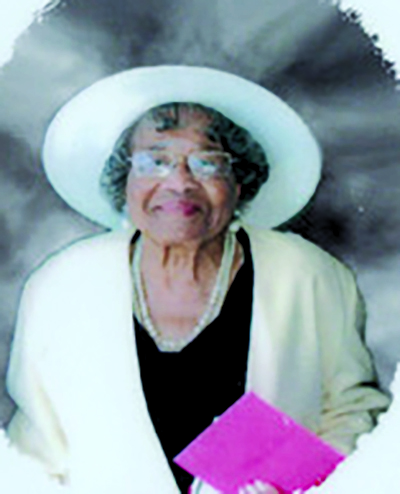 Mother Elnora Dillard died on Nov. 25 at the age of 95.
Born on February 23, 1923 to Sammy and Hattie Gibbs in Keithville, La., she confessed Christ as her personal savior at an early age and was baptized at Mount Bethel No.1 Baptist Church.
She married young to Floyd Anderson. The couple had one son, James Lee Anderson. Not long after marriage, she relocated to Oakland, where Henry “Hank” Anderson was born.
In 1947, she joined the Bible Fellowship Baptist Church under the late Rev. O.P. Smith. Her church membership continued under the pastoral leadership of the late Rev. A.Q. West and Dr. Timothy Hawkins.
She remained a faithful member and usher until her health failed.
In 1960, she met and married Ernest Dillard Sr. To this union was born Ernest Dillard, Jr. They provided a loving home for Ernest “Coolcat” and her son, Henry “Hank.” Mrs. Dillard, who was fondly known as Nora, was a woman of God and God-fearing – the presence of God was in her every conversation.
Her commitment and unconditional love for her family was exemplified in her daily life. She was a giving, helpful and determined individual.
A pillar in her neighborhood, she would often be found on her porch being greeted by everyone. She was also was very humorous.
She was preceded in death by her parents; her brother, Mack; her first born son, James L. Anderson; a daughter-in-law, Collette Anderson; three grandchildren, Michael, Marcus, and Ronnie; and two great- grandchildren.
She leaves to cherish her memory, two sons: Deacon Henry “Hank” Anderson and Ernest “Coolcat” Dillard and his wife, Evelyn Dillard; her sister, Pauline Wilson; a goddaughter, Marilyn-Earl Jefferson; her long-time best friend, OraLee Samuel; grandchildren: Lashawn, Angel, April, Johnathan, Sir Henry, Alfred, Lisa, Sonya, Tonya, Roshan, James Jr, and Kenisha; 30 great-grandchildren; 38 great -great-grandchildren, and a host of family and friends.