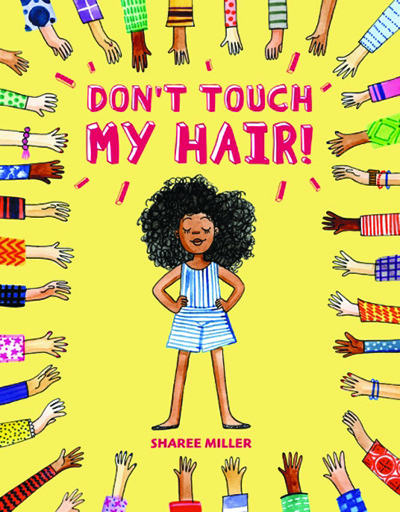 May I have that, please?
That’s what you say when you want something, and people are impressed by your manners. You’re a kid who never just takes, you always ask first because you want the same kind of manners back. But in the new book “Don’t Touch My Hair!” by Sharee Miller, you might have to ask for some good manners, too.
Aria loved her hair.
She loved it because it was bouncy and curly, dark and soft. She loved it because it grew “up toward the sun like a flower,” and because she could do a whole bunch of different things with it, depending on her mood.
Problem was, everybody else loved her hair, too. And they all wanted to touch it.
Aria knew that people were trying to be nice. They were just curious because they didn’t have hair as bouncy-soft as hers. But nobody ever asked permission before touching, and that was a big problem!
She tried to hide, but they found her on land. She pretended to be a mermaid but even the ocean’s creatures wanted to touch her hair. The jungle was no better, and someone very large was waiting for her when she hid “in the tallest castle tower.” Not even a trip to the moon helped Aria – even moony creatures were fascinated by fluffy hair! And when she did finally find a spot with no reaching hands, it was a lonely place.
That wouldn’t work at all, so Aria just went home, hoping she could ignore the problem. She covered her hair with the hood of a sweatshirt but people still wiggled their fingers. Aria was at the end of her rope, and she let go.
She yelled and she screamed and she shook her arms. She stomped and she shouted. And finally, Aria stood up for herself, nicely. Because sometimes, “nicely” gets you what you want.
No. It’s such a simple word: two letters, one sound, one unambiguous meaning. It can be pretty powerful when used in the right situation, and in “Don’t Touch My Hair!” your child will learn that it’s a perfectly good word to say.
And yet, learning to use “No,” isn’t all your child will get here: this book also conveys deep appreciation for one’s assets, which is doubly important at a time when African American girls may struggle with curly-hair issues. Author Sharee Miller gives her little heroine total pride in her “soft and bouncy” locks, and that’s contagious. It almost hurts, later on, when Aria physically hides herself.
But back to that word: no. Through an over-the-top tale, Miller goes on to show that the desire not to be touched casually is a normal wish with a simple solution that won’t chase away friends. The em-powerment to put that solution to work is in here, too.
For a child who dislikes handsy people, that’s a game-charger that promotes firm self-preservation, “nicely,” but with the right touch of sass. The 4-to-8-year-old kid who needs “Don’t Touch My Hair!”… shouldn’t she have that?
“Don’t Touch My Hair!” by Sharee Miller, c.2018, Little, Brown and Company, $17.99 / $23.49 Canada ,40 pages.

Kamala Harris Is Running For President in 2020

Andre Thierry Brings in the New Year at Sweetwater