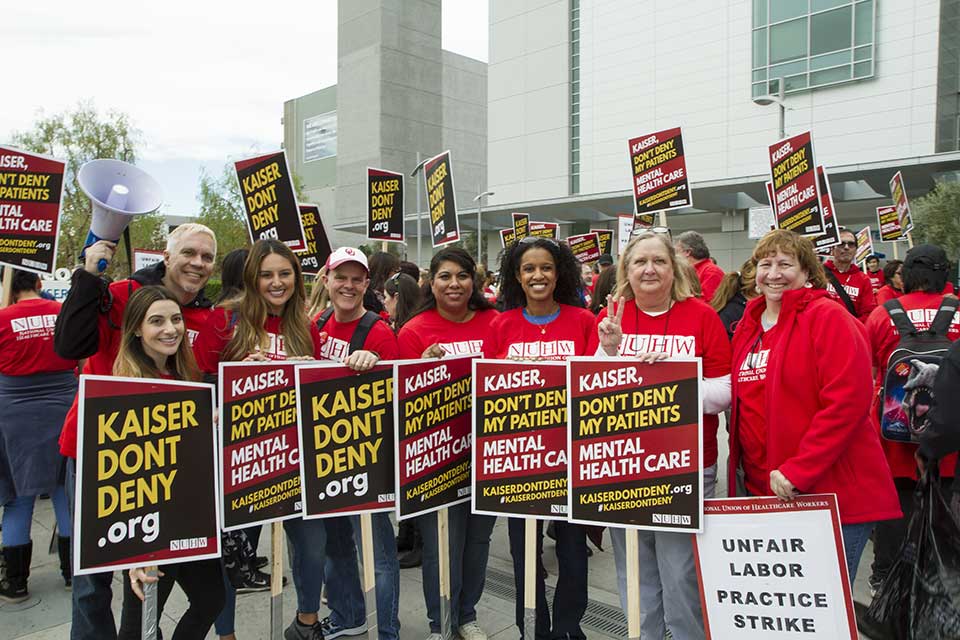 Kaiser Permanente Thrive mental health clinicians represented by the National Union of Healthcare Workers (NUHW) held a strike at Kaiser facilities, Dec. 10 to Dec. 14, across California.
During the five-day strike, 4,000 psychologists, therapists, social workers, psychiatric nurses, and addiction medicine specialists — along with other medical professionals — staged pickets outside 32 facilities from San Diego to Sacramento.
Five years after California fined Kaiser Permanente a record $4 million for violating the state’s mental health parity law, Kaiser is still denying patients access to consistent, reliable mental health services, according to the union.
Last year, the state found that Kaiser was still in violation of California law by not providing its members with timely access to mental health treatment, according to a statement released by the union. Patients with serious mental health conditions were forced to wait weeks or even months to see their therapists or receive treatment. Kaiser pledged to improve its services or face up to $1 million in additional fines.
“As Kaiser mental health clinicians, we know firsthand that Kaiser still isn’t fixing the problems,” the union media release said.
State and federal mental health parity laws require that patients get the same care for mental health issues as for physical health issues. But Kaiser, which reported a $3.8 billion profit last year and has $28 billion in cash reserves, still isn’t complying.
“That’s why we’re going public to demand that Kaiser finally end long waits for appointments, and start treating mental health patients with the same urgency and respect it provides to patients with broken bones or diabetes,” the media release said.
Responding to the union, Kaiser Permanente said in a media release: “We have been hiring therapists, increasing our staff by 30 percent since 2015 – that’s more than 500 new therapists in California – even though there’s a national shortage. We’ve invested $175 million to expand and improve our mental health care offices, to provide environments that offer our patients convenience, comfort and privacy.
“Kaiser Permanente is the highest paying employer for mental health workers in California. The union is demanding wage increases that would be even higher.”
“The union’s principal demands at the bargaining table have not been about improving care and access. Rather, in addition to seeking even higher wages and benefits, the union is demanding changes to per¬formance standards that would reduce, not increase, the availability of mental health care for our patients.”

Near Lockdown in The Bay and LA: Residents Instructed to Stay Home

Opinion: Coal Terminal Would Place Oakland on the Wrong Side of...