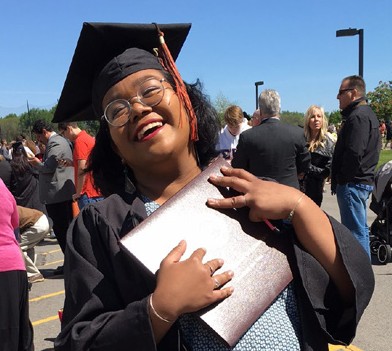 With gentrification mak­ing it increasingly harder to thrive in their hometown, many Oakland youth, in par­ticular, are struggling to see a path to the future. Thousands of Oaklanders have stepped up to level the playing field for Oakland’s young people. Among them are a legion of Bay Area professionals who have joined East Bay College Fund to become mentors to Oakland high school grads beginning their college edu­cation. By providing guid­ance and encouragement to students, these volunteers are committed to making sure the burgeoning economy leaves no one behind.

College campuses can of­ten be daunting environments for low-income students who are underrepresented in high­er education. Mentors find that helping a student navi­gate and succeed in this envi­ronment is often as rewarding for themselves as it is to their mentees.

“Mentoring is really ener­gizing and beneficial to both people, said Kenneth Tyrone Forward, a Business Systems Manager for PG&E currently mentoring a Castlemont High School graduate enrolled at College of Alameda. “It’s en­ergizing for the mentor as they have the opportunity to share and pass along the knowledge and experience they have ac­crued through their career.”

The combination of schol­arships with mentorship and peer-support services seem to be the ticket for success. While college drop-out rates for marginalized students in the U.S. is high, with approx­imately only 20 percent com­pleting a degree in five years, East Bay College Fund schol­ars, who are still in school (2013-2018) are persisting at 88 percent.

Recognizing the opportu­nity to reinvest in their com­munity, countless Oakland-based companies are choosing to partner with organizations that provide mentors to local students beginning college. Oakland native Curshanda Cusseaux-Woods, Commu­nity Relations Manager at Kaiser Permanente, serves as a mentor coordinator. Cus­seaux-Woods finds inspira­tion in how her mentee, “…is so focused on getting through college. Having parents who didn’t have higher education, who didn’t go to college, she’s just very motivated. She has some personal obstacles that she overcame—she doesn’t let that stop her.”

As a first-generation U.S. citizen, mentor David Chu is familiar with the obstacles to college success that many stu­dents face in Oakland, where more than a quarter of resi­dents are foreign-born. Chu found out about the opportu­nity to mentor from the chari­table services division of Blue Shield of California, where he works as a marketing ac­counts manager. He says that despite the hurdles his mentee has had to overcome, “I’m just stunned by where he is right now. So if I can support that,…I’m happy to.”

Oakland native Denzel Tongue had a mentor while studying at Occidental Col­lege, where he graduated in 2017. On whether having a mentor impacted his ability to thrive in college as a first-generation, pre-med student, Denzel said, “During my first semester of college, I was do­ing well in a lot of my classes but I was really struggling in a chemistry class, and [my mentor]…really helped keep me going. I think I might’ve had a very different experi­ence if I didn’t have him there supporting me.”

In the midst of so much dis­parity and destruction of com­munities, the power of people is alive and well in Oakland. The city that birthed the Black Panther Party, is a mecca for art and culture is also deeply embattled by the challenges of gentrification. Every movement for equity starts with the passion and generosity of regular people willing to stand up and say, “how can I be of service?” This is how change begins.

To be part of the mentoring movement in Oakland, help a dream come true, and sup­port an Oakland-born college student by becoming a men­tor, visit http://www.eastbaycollegefund.org/get-involved/mentor/. To contribute to a scholarship for Oakland’s re­silient youth pursuing a high­er education, consider mak­ing a donation of any size, or contribute to the inaugural Ronald Dellums Scholarship. Go to: www.eastbaycolleg­efund.org/donate. Fill out the pledge form to indicate how you would like to name the gift.