What can make a 6-year-old and a 78-year-old spend their day together at the Richmond Recreation Complex? The answer is chess.

In what may be the city’s most age-diverse competition, 44 players spanning from ages 6 to 78 years old participated in the 8th Annual McKinley Williams-John Easterling Community Chess Tournament in Richmond on Saturday.

The field was diverse in skills, with rated, unrated and casual players in an annual Quad format event held at the Richmond Recreation Complex. Among them were three U.S. Chess Federation players with ratings that are near Master level, said TC Ball of the West Coast Chess Alliance, which partnered with the Richmond Community Services Department to hold the event.

“This was a very strong field of players,” Ball said.

Several players from the Richmond Senior Center on Macdonald Avenue competed, as well as from Kennedy High School’s chess team.

“Our community chess tournaments are truly unique because they included rated, unrated, young and old all playing together,” Ball said. “Causal or unrated players normally do not get an opportunity to play competitively in chess tournaments.”

The tournament recognizes the contributions of Dr. McKinley Williams and the late John Easterling’s efforts to promote chess in the City of Richmond.  The initial tournament was started by James “Jim” Goins, former Finance Director/Treasure of the City of Richmond, according to Ball. To honor retiring Contra Costa President Dr. Williams, during the planning meetings for the tournament it was decided to include Mr. Easterling.  Mr. Goins played in the first tournament eight years ago.

The next year, Jerry Anderson and Troy Porter approached the West Coast Chess Alliance about continuing the tournament. And it is this tournament that has led to the partnership between the chess group and the city that has led to community chess events throughout the year.

“I want to thank Tetteh Kisseh and the staff at the Richmond Recreation Complex for their excellent support in making our 8th annual tournament a success,” Ball said.

Oakland May Name Road in Honor of Oscar Grant

“Motown: The Musical” Is a Must See 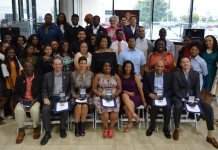 A Roadmap for Counting More African Americans in California During...

BOOK REVIEW: “The Many Faces of Josephine Baker”