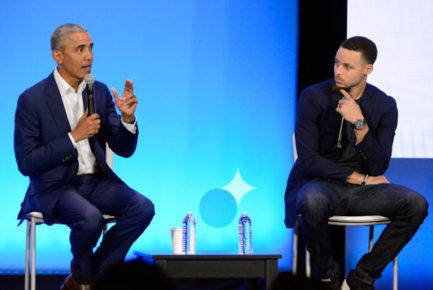 Oakland, CA – Former President Barack Obama hosted a powerful town hall with special guest Stephen Curry.  One of Oakland’s most recognized Warriors player sat along side Obama on stage in between twenty chosen young men.  The mood was light and laughter was present.

Obama whose an excellent speaker and motivator was in the driver’s seat while Curry rode along during their Q&A session.  Introducing himself as “Oh I’m Michelle’s husband and this is Ayesha’s husband.” Obama brought some light to a sold out private event that brought out hundreds of young African-American men from all over the U.S.

It’s the fifth anniversary of My Brother’s Keeper Rising of the initial launch of My Brother’s Keeper, an initiative started by the former President following the death of Trayvon Martin. An opportunity for young men of color and community leaders to connect, learn and share. Today’s event kicked off the two-day event and it did not disappoint.

The MBK Alliance, now part of the Obama Foundation, leads a national call to action to build safe and supportive communities for boys and young men of color where they feel valued and have clear paths to opportunity, with a focus on encouraging mentorship and reducing youth violence.

Musical genius and EGOT recipient, John legend held a Q&A with the mom’s who lost their sons to senseless violence. Dr. Sybrina Fulton, mother of Trayvon Martin, Rep. Lucy Mcbath, mother of Jordan Davis, and Rev. Wanda Johnson, mother of Oscar Grant. Each woman spoke to the young men about hope, faith and not giving up on themselves.

“This is a club no one wants to be a part of, I wouldn’t wish this on anyone,” said McBath.

“I was broken and hurt and didn’t know how to deal with that type of pain,” Martin explained. “I reached out to other mother’s who sons were killed to senseless gun violence. I helped other woman and that helped me.” 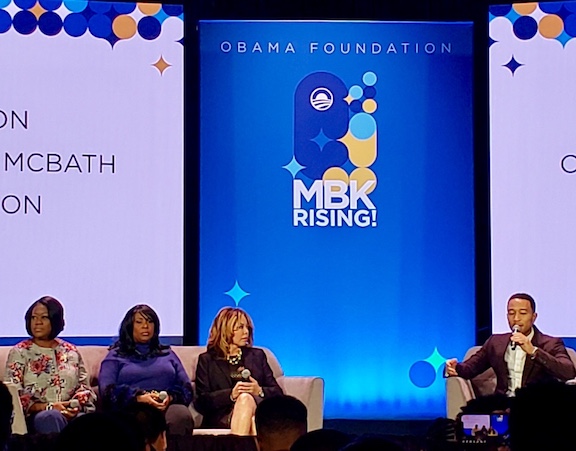 Obama talked about his own childhood and how hard it was for him to grow up without a father present.  When Curry spoke about his upbringing, he focused on not much of his dads 16 year NBA career but more his consistency to be present in his life for the ups and the downs.

“I was all kinds of screwed up when I was in high school,” said Obama.  For me, I was a good kid in the sense that think I was always kind to people, I didn’t have a mean spirit.  But I did not have a clear purpose or clear sense of direction during a big chunk of my high school years.  Some of it was anger about my father not being there.”

Curry who relished in Obama’s advice often joined in to discuss his own hurdles throughout his career.  Obama gave him an assist when he brought up his ankle issues that kept him sideline much of his early career. Curry through laughter explained just how tough that process was and how a good surrounding can lead you to success.

“The confidence to kind of get over that hump was a process,” he explained.  “The swagger that you see on the court now it wasn’t always there.  It was a constant struggle.

Self confidence was something that wasn’t always natural for me.  It took me awhile to get to a place where I was comfortable in the room and comfortable in dealing with challenges.”

Tomorrow is Day 2 and will conclude MBKRising. Guest speakers will feature Ryan Coogler who directed “Black Panther” and is a native of Oakland along side actor Michael B. Jordan.

Funds to Help Jobseekers Continue to Decline Under Libby Schaaf

49ers Stunned In Loss To Rams 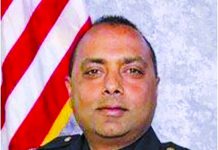