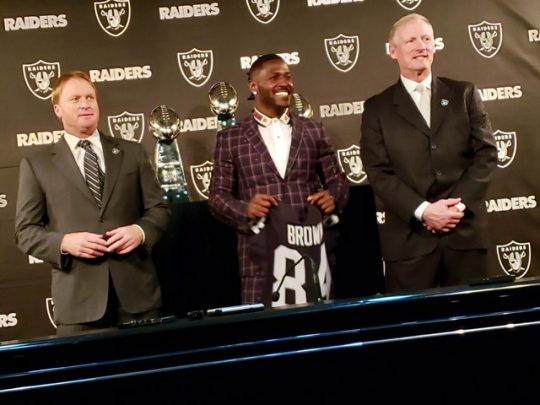 Oakland, CA – A very happy Antonio Brown greeted the media with a big smile after he was introduced.  The newly acquired Brown addressed the media during his first press conference as a Raider.  The best wide receiver in the NFL comes to Oakland after a tumultuous season.

Brown, the most explosive wide receiver shows up every week playing at a high level.  So its natural he would want his teammates to produce the same energy.  The drama surrounding his early exit in Pittsburg is now behind us.  The Raiders know first hand about dealing with eccentric players.  Marshawn Lynch set his own rules, but gave 100 percent every time he stepped on the field.

“My plan is to get around here, get in the room, start holding guys accountable, let them know it’s a certain type of standard here now that we got to uphold,” Brown said.  “Receivers, we need an accountability system… drops (being) late, fines, missed routes, missed sights.  We’re going to hold each other accountable, and if you don’t fall in that accountability, you get fined.

And so when Derek Carr walks in the room, he sees all the receivers… This guy owes this, — so everyone has that accountability factor.  Because if everyone’s he’d accountable, we’ve got to be a certain standard.  So, I’m just here to set certain standards, hold guys accountable, and just uplift the tradition of, it’s unacceptable to accept not our best.  That’s kind of my attitude.  We’re still shaping the team.  I can’t do it all in one day, but just as a first start, kick off me being here and us doing some positive things moving forward.”

Brown earned his first Pro Bowl honor in 2011, as he became the first player in NFL history to record at least 1,000 receiving yards and at least 1,000 return yards in a single season.  Over his career, he has returned 186 career punts for 1,759 yards, including four returned for touchdowns, in addition to returning 47 kickoffs for 1,173 yards and another score.  Brown is one of just three players in NFL history to total at least 70 career touchdown receptions and five return touchdowns.

Newly appointed General Manager Mike Mayock has shown why he was the man to replace Reggie McKenzie.  Mayock brought the best wide receiver to Oakland and also mentioned that he’s been fielding calls from top athletes who now want to be a Raider.  More moves will be made, in fact Oakland just signed Tyrell Williams who will back up Brown.  Williams, last season appeared in 16 contests and made 10 starts, hauling n 41 passes for 653 yards and adding five scores.

Eviction in Effect for Army Base Businesses

Op-Ed: Civilians Should Oversee the Police

The 49ers are headed to the Super Bowl after dominating the...

Raiders Back To Reality In Loss To Vikings