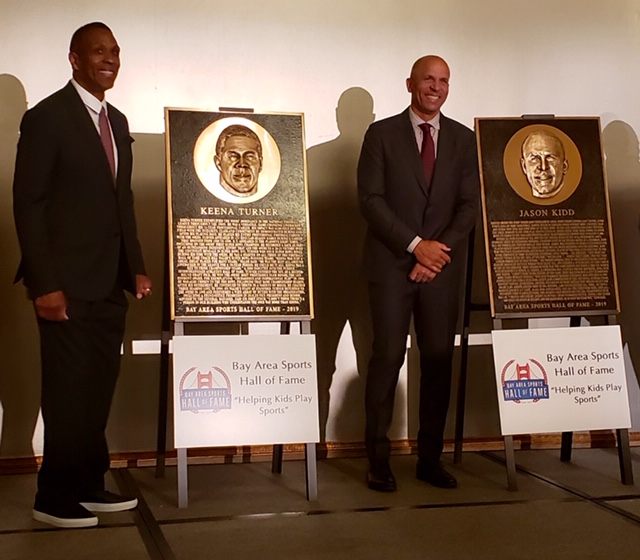 A night to celebrate the best athletes to play sports at a high level in the Bay Area didn’t go unnoticed.  Kidd did a complete sweep of honors over the past year.  His former college, Cal Berkeley inducted him into their Hall of Fame last summer and a few months later Kidd was inducted into the Naismith Basketball Hall of Fame.

The former NBA head coach who is looking to make a comeback on the bench, reached out to his former high school coach, Gordon Johnson to present him tonight.  Johnson watched Kidd develop into a marquee athlete from childhood through his adult years.  Kidd had a special talent that sent him to winning his first NBA championship with the Dallas Mavericks. 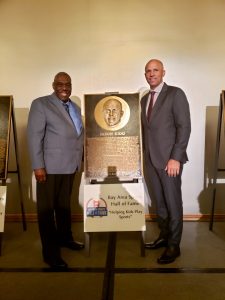 “It’s a great honor to be inducted into Cal’s Hall of Fame as well as in Springfield,” said Kidd.  But this is where it all started for me going to St. Paschal’s elementary, St. Joesph’s high school and Cal.  It starts with a dream, I wanted to be a basketball player and watching guys like Magic Johnson really inspired me.

Gordie saw me develop from elementary through my coaching career, so I figured he was the best person to tell my story.”

“I’m so honored to be able to speak on behalf of Jason Kidd,” Gordon said.  “It speaks volumes to our relationship.  It was well deserved from the time I met him, we had a father-son, big brother type of relationship and its been special to go through his entire journey with him.” 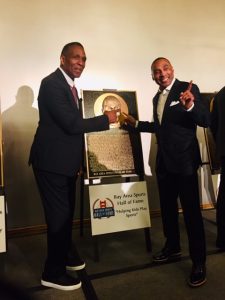 Turner, who is a former 49er players and current Executive won four super bowl championships with the organization.  A remarkable career as a player, an analyst and now as an Executive of the team.  Turner who you’ll find on the sideline before and during the games, deserves to be inducted into the Pro Football Hall of Fame in Canto, Ohio.  Hopefully that day will come soon.

Eddie Debartolo Jr, Joe Montana and Ronnie Lott will present Turner tonight.  His kept some good company on the field.  Roger Craig was also present to watch Turner’s huge honor.  A former Linebacker, Turner played eleven season with the 49ers before retiring and becoming an analyst for the team.  He’s spent 22 years as a member of the team’s front office and currently serves as Vice President and Senior Advisor to the General Manager.

“It’s really overwhelming, I’ve been very fortunate when I played and who I played with, said Turner.  “And to still be apart of the organization is humbling and overwhelming but I’m enjoying every minute of it.

Sometimes its about staying the course, I don’t know that I had a plan but when you stay focused, committed and not let the view get to long in front of you.  You meet good people and have a good interaction and that’s remembered.  But you have to put in the work and treat people fairly.  I don’t know, I guess I was lucky to be with this organization for 33 years.” 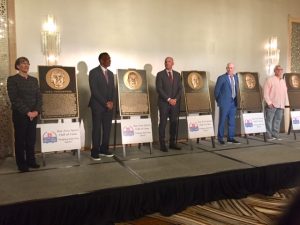 Both Kidd and Turner had a long journey to become the legends they are today.  But as they both said, with hard work, focus and networking with the right people anyone can live out their dream.  While Turner mentioned he didn’t really have a plan, he had a vision of success that led him to establishing a successful football career.  He is well respected and he looks to give that opportunity to others.

Kidd who took a year off is looking to get back into coaching.  In the meantime, he enjoys golf and giving back to his community.  This Saturday Kidd joins fellow Oakland native and former NBA player, Antonio Davis at Willie Keyes Recreation Center in West Oakland, where they will renovate the gymnasium, computer room and outside play area for the kids.  Oakland Parks and Recreation Director, Nicholas Williams and Council member Lynette McElhaney will be key note speakers for the event.

BOOK REVIEW: “The Case for Loving: The Fight for Interracial Marriage”

Expired License or Registration? You Got 60 More Days to...

Oakland Ballerina Angela V. Watson, 16 Dances Her Way to the...

Andre Ward Talks About His Future in Boxing