Angela V. Watson, a 16-year-old American ballet student at the San Francisco Ballet School and the only African-American student in the Women’s Advanced Preprofessional Level 7, has been admitted to the level Supérieur to train at the Paris Opera Ballet School in France. Very few Americans are offered such a humbling opportunity to train with the world’s first and finest ballet training program and competition is fierce. 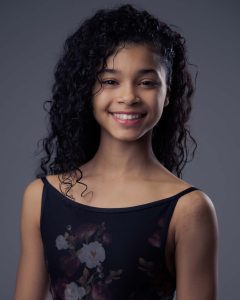 95 percent of those admitted are French and Angela is one of few Americans and the first African-American hailing from Oakland, California to attend such a distinguished Summer Intensive Program. The School is the feeder to the Paris Opera Ballet Company, which is considered by many dance instructors to be the most prestigious ballet training program.

This year, of the 670 applications submitted from around the globe, only a total of about 200 were accepted to the 2019 Summer Intensive Training Program. Angela Watson from Oakland, California is one thirty 30 non-French applicants invited to train. In addition, Angela is invited by the San Francisco Ballet School Director, Patrick Armand, to attend the program as an American Exchange Student Scholar on a full Artistic Merit Scholarship sponsored by the American Friends of Paris Opera Ballet Foundation.

Angela began her training in classical ballet just 5 years ago at the Oakland School for the Arts School of Dance emphasis at age 11 where studied under the tutelage of Reginald Ray Savage the Principal Choreographer and Artistic Director and his assistant, Alison Hurley. As a result of Mr. Savage’s insistence that his students adhere to a strict course of training standard that meets those of the most renown world choreographers and ballet masters such as Arthur Mitchell founder of Dance Theatre of Harlem, Alvin Ailey founder of Ailey American Dance Theatre and Patrick Armand Director of San Francisco Ballet School, Savage has sent a wealth of highly trained dance students into the world of arts-based higher education and/or professional dance careers. More of his choreographic genus can be appreciated during the OSA Dance Concert 2019 on May 16-19.  Additional program and ticket information can be found at www.oakarts.org or here.

The San Francisco Ballet School will feature Angela and other S.F. Ballet School students in its 1st Annual Spring Festival (formerly the “Student Showcase”) at the Yerba Buena Center for the Arts on May 22, 23 and 24, 2019, where she will dance in the D’isoline Ballet choreographed on her and the students by S.F. Ballet Company Artistic Director Helgi Tomasson. More information and tickets are available for the Spring Festival performance at www.sfballet.org/school .

Permission for the use of the photos and text was granted by Angela’s parents Carole and Dr. Geoffrey Watson.