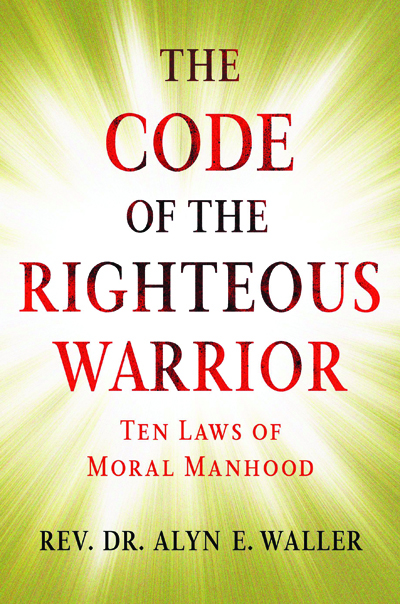 These days, you just don’t know what to expect.

Things used to be laid out nice and easy: a real man took care of business, he settled disagreements with his fists, and he was head of his household. But it’s a new world now with new expectations, and in “The Code of the Righteous Warrior” by Rev. Dr. Alyn E. Waller, you’ll know how to get through it.

Even when he was a small boy, Alyn Waller “really, really” loved to fight but, alas, he was the smallest boy in his class and was bullied. That changed when he was in fifth grade and his cousin came to live with Waller’s family. Lonnie taught Waller how to fight.

That was largely forgotten by the time Waller got to college; alcohol and parties were more important and he lost his way until an older man in his church trained Waller and some of his friends in the martial arts. Waller took his training further himself, and earned “advanced ranking” in four additional disciplines, including one that teaches “leadership, spiritual development, fiscal responsibility, a positive mental attitude” and more.

A Righteous Warrior, as Waller calls a man who wants to live life with a “Christian Warrior’s code,” has three choices when “he is under any type of attack”: he can run, which is a valid option. He can fight, as Jesus did in the temple. Or he can “take one for the team,” knowing that “everything will be OK in the end – and if it ain’t OK, it ain’t the end.”

There are  10 principles of a Righteous Warrior.

Keep life simple and ask yourself what’s essential and what’s merely interesting. Know the difference between true and True. “[D]evelop a mindset that prepares you to play whatever cards life deals” and be judicious with your assets. “Expect the unexpected.” Fight for your family, no matter what it looks like. When things get bad, “keep your head in the game…” Remember that a “righteous man learns… earns… and then he returns to others” and finally, don’t quit, but know when it’s time to stop.

Considering that this book was written by a minister, it’s quite a surprise: “The Code of the Righteous Warrior” doesn’t completely advocate nonviolence.

And yet, that may be why it works. Author Rev. Dr. Alyn E. Waller offers advice for today’s Christian man, but in a way that reaches back centuries, as though he’s mixed the Bible with Zen teachings and inserted his own experiences to make things even more relatable. It has the feel of lightheartedness, rather than lecture, but readers will surely know that Waller is serious in his advice.

He’s also thorough, touching on issues that may be touchy for some, including the ever-controversial topic of “submissive” women. On that, Waller has surprising words.

Although this book is meant mostly for African American men, it’s worthwhile for any man, and for mothers and wives of those men, too. Start “The Code of the Righteous Warrior,” and you can expect good things.

A Slow Death for Mumia Abu-Jamal and Thousands of Prisoners in...

Opinion: Donald Trump is Not Alone Among Americans in Failing...

Marin: Reception to Support the Arts at MLK Academy, June 3