Editor’s Note: Leo Bazile, a former city councilmember and scholar on reparations issues has published articles in the Post and has proposed that Oakland “remain in the vanguard of di­rect action and advocacy on the issue.” He says, “The leadership shown by Barbara Lee and Lynette McElhaney makes it pos­sible for the community to participate through a commission to present our plans to congress.”

She testified about her dis­covery that she was a descen­dant of one of the largest and most powerful slave trading families in the history of this country.

Browne said she, as a 27-year old Seminary student studying theology and ethics, received a family history brochure from her grandmother that pointed out that she is a descendant of the De Wolf family of Rhode Island slave trad­ers that brought more enslaved Africans to the Americas than any other U.S. family. Her calm and sincere testimony revealed their family’s relationship of wealth and political power. When she said:

“Over 12,000 men, women and children were taken across the middle passage in their ships.” The family’s leading slave trader, James De’ Wolf, was reported to have become the second richest man in the nation at the time of his death—and he served in the U.S.Senate.”

Browne’s testimony should be read by all who are concerned about the political and moral questions that the Reparations is­sue raises for the upcoming 2020 elections.

Since Black Democrats are being told by some leaders that raising the Reparations issue could jeopardize the election, Browne’s White Fragility is­sue rubs up against the political reality of when and how to ad­dress this moral imperative.

So is the moral impera­tive more important to African Americans than who the next president is going to be?

“I want to acknowledge rightaway that the very idea of this REPARATIONS FOR SLAVERY AND RACISM is to assault their sense of what this nation has been, of how we achieved our national great­ness and perhaps even the role their families and communi­ties played in this history. To weigh a national effort at ac­knowledgement and repair is to discount what they believed were hard sacrifices of previous generations. And to question the sources of their prosperity is to connect them to the history of slavery.” 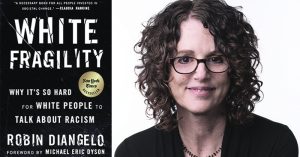 In her New York Times best­seller on the subject of “White Fragility,” Robin Diangelo wrote about how whites enjoy benefits from this separate and unequal society “We are insulat­ed from racial stress, at the same time we can come to feel entitled to and deeply deserving of our advantage. Given how we expe­rience racial discrimination in a society we dominate we haven’t had to build our racial stamina. Socialized into a deeply inter­nalized sense of superiority that we either are unaware of or never admit to ourselves, we become “highly fragile” in conversations about race.

“ To connect us to the system of racism triggers a range of de­fensive responses such as anger, fear and guilt And behaviors such as argumentation, silence and withdrawal from the stress-inducing situation.

These responses work to re­instate white equilibrium as they repel the challenge. They return our racial comfort and maintain our dominance within the racial hierarchy. I conceptualize this process as “White Fragility.”

“ Though white fragility is triggered by discomfort and anxi­ety, it is born of superiority and entitlement. White fragility is not a weakness per se, in fact, it is a powerful means of white racial control and protection of white advantage,” Di Angelo writes.

Aaron Price: From Homeless Veteran to Acceptance at UC Berkeley

The Lie About Voter Fraud Is The Real Fraud