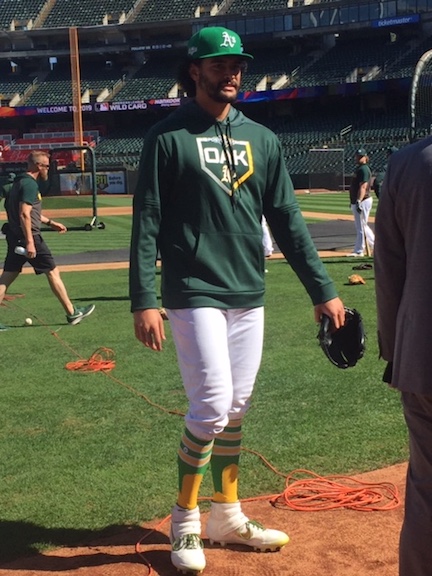 Oakland – It’s officially October baseball and the stage has been set.  The A’s named lefty Sean Manaea as their starter for the Wild Card game tomorrow against the Tampa Bay Rays.  Rays starter will be Charlie Morton.

Manaea has been outstanding since his return in September.  He’s tossed five games, going 4-0 with a 1.21 ERA.  A tough decision for A’s manager Bob Melvin as he has a selection of good pitchers including Mike Fiers.

“I think it came down to the fact that since Manaea’s been back, he’s pitched great every single game out,” Melvin said.  “We were lucky to have two guys to consider in that respect and a luxury to have two guys we’d be comfortable with, but Manaea will start.”

Oakland native MC Hammer will throw out the ceremonial first pitch ahead of Wednesday’s American League Wild Card Game at 5:09 p.m. A limited amount of tickets for the A’s versus Rays game are still available at athletics.com/postseason.

The A’s will host the American League Wild Card Game on Wednesday, Oct. 2. It is the A’s first home Postseason game since 2013. A limited number of tickets are still available at athletics.com/postseason.

The 20/20 Experience Comes To Oakland

Why Experts Are Urging Social Distancing to Combat Coronavirus Outbreak

Tampa Bay Rays Beat the A’s with the Long Ball...