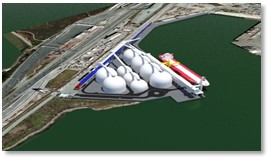 The Oakland City Council accepted over $240 million state taxpayer dollars to support what it promised would be a transformative, generational project creating jobs, expediting commerce, and significantly improving environmental conditions.
Oakland has spent the money, but it has not delivered the project. Instead it is taking every political and legal tactic to ensure the promised project will never be built.

A federal court in San Francisco already held the City’s actions to prevent the building of a multicommodity terminal on the Army Base violates the law, and the State of California is considering forcing the City to give back the hundreds of millions of spent grant dollars.

In 2009, the City embarked on an ambitious plan to transform the decommissioned Oakland Army Base into an international-scale logistics hub. Central to the plan was a new intermodal facility with immediate access to existing rail and a deep-water port.

The ability to move cargo by rail to sea would significantly reduce truck traffic through West Oakland, improving air quality in the surrounding neighborhoods—and the entire East Bay. The project also promised thousands of new construction and logistics jobs that were required to be offered first to West Oaklanders.

This vision and its remarkable benefits rightly persuaded the California Transportation Commission (CTC) to award the City the grant. An unprecedented coalition of Bay Area and San Joaquin Valley transportation agencies declared the project the number one priority for all of Northern California.

Ten years on, the infrastructure is in place, but the vision is a distant memory. Citing political opposition to the export of fossil fuels– though it was always known by the City and State that such commodities were over 50% of the active shipping market – the City continues to intentionally block the project. The City’s refusal to honor its legal commitments not only exposes Oakland taxpayers to hundreds of millions of dollars in potential liability, it likely ensures that such visionary and ambitious proposals will no longer receive state support.

By all accounts, for over a decade the developer has honored the agreements and performed. This includes taking delivery of a new $2.3 million clean air locomotive funded in part with a grant from the Bay Area Air Quality Management District. Reviews of its hiring practices confirm unprecedented retention percentages of West Oaklanders, previously incarcerated persons, and a myriad of new apprenticeship entrants into the building trades.

When a public agency proposes projects for state funding that agency promises to spend those dollars according to the terms and conditions of the grant. The resulting grant agreement spells out very clearly the roles and responsibilities of the agency and the state. Failure to perform comes with significant financial penalties. When the CTC established the guidelines for this grant program, the Commission had no cause to consider the ultimate penalty—requiring the public agency to repay the grant. But today, the City of Oakland’s failure to adhere to the grant requirements may leave the CTC no other option.

Oakland promised the CTC, the residents of Oakland, and the entire Northern California economy that they would deliver a world-class logistics hub that would benefit the environment, create jobs and economic opportunity, and be a model to the world. The developer, apparently, remains ready to so deliver. The City needs to get back on track and agree to adhere to the terms of the grant.
John Barna was executive director of the California Transportation Commission from 2005 to 2009.

Open Letter: Why I am Running for Alameda County Auditor-Controller

OP-ED: Oakland Terminal goes above and beyond industry standards to ensure...